Inch House is a splendid location to see the many of the wonderful Historical & Monastic sites of both County Tipperary and the surrounding Counties. 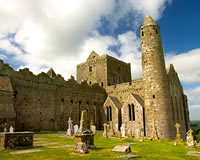 It’s huge, it’s complex, it’s iconic, there is nothing like it anywhere else in the world and it’s right here in the heart of Tipperary. The Rock of Cashel (Carraig Phádraig), more formally St. Patrick’s Rock, it is also known as Cashel of the Kings. Reputedly the site of the conversion of Aenghus the King of Munster by St. Patrick in the 5th century AD. Long before the Norman invasion The Rock of Cashel was the seat of the High Kings of Munster, although there is little structural evidence of their time here. Most of the buildings on the current site date from the 12th and 13th centuries when the rock was gifted to the Church. The buildings represent both Hiberno-Romanseque and Germanic influences in their architecture.

Holycross Abbey, sited about four and a half miles from Thurles in Co. Tipperary, is located in a magnificent setting on the banks of the River Suir. It is a fantastically positioned monastery dating back to the early 12th century. It was built by Donal Mór O’ Brien for the Order of Tiron and takes its name from the relic of the True Cross. Before the close of the 12th century, it was passed on to the Cistercians. It became a place of pilgrimage for people from all over the country. The church has many interesting features including a variety of fascinating windows, mural paintings and many fine carvings.

The Round Castle was built in 1213 by command of King John of England. It was originally a wooden Motte and Bailey fortification but was rebuilt in stone in 1281 along with the rest of the castle as we see it today. Though the outside of the tower appears round, the interior is octagonal. It is roughly about 35 feet high with three floors and the walls are roughly 6 feet 11 inches in thickness. This tower stood at the edge of Lake Cré, which has since been drained, and can be seen on the Mall.

The Square Castle, along with the curtain walls and two sentry towers, was built in 1281 out of hard sandstone. The gate tower is over 90 feet tall and it walls are roughly 8 feet are their thickest. The entrance is clearly seen from Castle Street as a pointed arch, through which you pass into the centre courtyard. Originally the draw-bridge of the castle would have stretched across the breath of the modern street. The Castle remained in the Butler family until1703 when it was sold to the King’s Hospital in Kilmainham but was soon sold again to John Damer in 1722.

It is unknown when exactly Damer House was built or by whom. Some records say that Lady Paisley of Golden grove built the house in the early 18th century but this is at the same time that the Damers owned the property. The house is built in the Queen Anne style and its architecture is pre-Palladian which is becoming increasingly rare in Ireland. The architect is unknown but the house contains a magnificent central staircase, a carved stone doorway and some of the original mantels. In 1798 it was used as a military barracks with the wing being added in 1858. The house has been many things in the past century including a school and a sanatorium. The house is now part of the Roscrea Castle complex and houses many interesting exhibits. 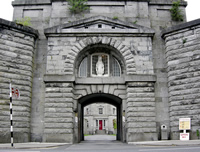 Nenagh Heritage Centre is located in two stone Georgian buildings which were built in 1840-1842 as the Governor’s House and Gatehouse of an extensive goal complex for North Tipperary. The building is located just a short walk from Nenagh town centre.

In the original Gatehouse, you can read the story of the McCormack brother’s; see the condemned prisoners’ cells and the execution area. Also housed in the Governor’s House is the Genealogy Centre which provides a family history research service for clients whose ancestors originated in North Tipperary. The main genealogical sources for the North Riding are computerised. These include church records (all denominations), Tithe Applotment lists (1830’s), Primary Valuation lists (1850’s), gravestone inscriptions (exclusive to the centre), civil births, deaths, marriages and the 1901 census.

Several other important sources, like the 1650’s Civil Survey, 1660’s Hearth Money Rolls and the 1840’s poor law rate books have also been input to the database. The centre provides an efficient genealogical service. Callers are welcome! Research is conducted on a fee basis.

Once the stronghold of the powerful Butler family, the castle retains its impressive keep, tower and much of its original defensive structure. It is one of Ireland’s largest and best preserved castles. It is situated on a rocky island on the River Suir. The castle’s attractions include an excellent audio-visual show which informs visitors about the castle.

The castle consists of a polygonal shell keep with an enclosing curtain wall, a corner tower and a gate tower. The shell keep is the earliest structure, dating from the 12th century. Shell keeps are common in England, but rare in Ireland. Inside the curtain wall is a two storey military barracks, which dates from the first half of the 18th century. The barracks is now restored and houses an informative exhibition on the history of the castle. 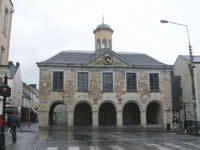 James Butler, Duke of Ormond, built the Main Guard in 1675 as the courthouse for the Palatinate of administrative area of County Tipperary. In 1715, the Palatinate jurisdiction was extinguished. In about 1810, the ground floor, a loggia of open arches, was converted into shops, a basement excavated and additional floors inserted. It has been recently restored to its original form and the open arcade of sandstone columns is once again a feature of the streetscape

An Early Christian site founded by St. Ciarán in the mid-6th century on the eastern bank of the River Shannon. The site includes the ruins of a cathedral, seven churches (10th -13th century), two round towers, three high crosses and the largest collection of Early Christian graveslabs in Western Europe. The original high crosses and a selection of graveslabs are on display in the visitor centre.

The long and varied history of Clonmacnoise is recounted in an audiovisual presentation shown in the visitor centre. There are also exhibitions that deal with the flora, fauna and landscape of the region. 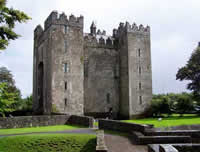 The Castle is the most complete and authentic medieval fortress in Ireland. Built in 1425 it was restored in 1954 to its former medieval splendor and now contains mainly 15th and 16th century furnishings, tapestries, and works of art which capture the mood of those times. Today, the castle stands peacefully in delightful grounds. The houses and cottages of the folk park spread out at the foot of its massive walls, much in the way that the cottages and crofts of old would have clustered around its base. We invite you to wander through the castle and marvel at the finest collection of medieval furniture in the country which brings to life a vital part of our Medieval past. Bunratty Castle closes each day at 4pm to prepare for the Medieval Banquet.

Within the grounds of Bunratty Castle is Bunratty Folk Park where 19th century life is vividly recreated. Set on 26 acres, the impressive park features over 30 buildings in a ‘living’ village and rural setting. Meet and chat with the Bean an Ti (Woman of the House) and various street characters including the Policeman and Schoolteacher who give the site its sparkle. Enjoy the tastes, scents, sights and sounds of this enchanting place as you stroll from house to house or around the charming village complete with school, post office, doctors house, hardware shop, printers and of course the pub! It’s a wonderful experience for adults and children alike with something for everyone to enjoy! 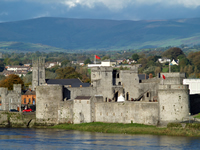 King John’s Castle is a 13th century Castle on ‘King’s Island’ in the heart of medieval Limerick City. The Castle overlooks the majestic River Shannon offering wonderful views of Limerick City. Discover history at its best, magnificent views and life in Norman times. Explore 800 years of history brought to life in the imaginative historical exhibition, excavated pre-Norman houses, fortifications, siege mines, and the battlement walks. King John, as “Lord of Ireland” minted his own coins and the Royal moneyer would have struck the coins in the Castle mint.

Today you can receive your own special coin as a souvenir of your visit to the Castle. The sights, scenes and sounds of the Castle and its environs all combine to recreate the atmosphere of the era. 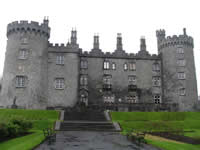 A 12th century castle remodeled in Victorian times and set in extensive parklands which was the principal seat of the Butler family, Marquises and Dukes of Ormonde. Due to major restoration works, the central block now includes a library, drawing room, and bedrooms decorated in 1830’s splendor, as well as the beautiful Long Gallery. A suite of former servant’s rooms is the Butler Art Gallery, which mounts frequently changing exhibitions of contemporary art. The Parade Tower is the Castle’s conference venue.